Right off the heels of blink-182’s release of Neighborhoods, Mark Hoppus is already working on the next blink-182 album.

Hoppus stated, “I’m sure these will all be Blink songs at the moment. I don’t have any plans to write songs with anybody else right now. If I do, it’ll be a collaboration or a one-off thing, but everything I’m writing right now is for Blink-182.” … “It’s really too early to tell. At the moment all I’ve got is a bunch of chord progressions and ideas. It’s more me playing my guitar and coming up with little ideas and melodies. By the time it goes to Tom and Travis and we work on it as a band, who knows what it will sound like.”

Wow, this is exciting! Let the release date speculation begin! Speaking of blink albums though, what’s your favorite? 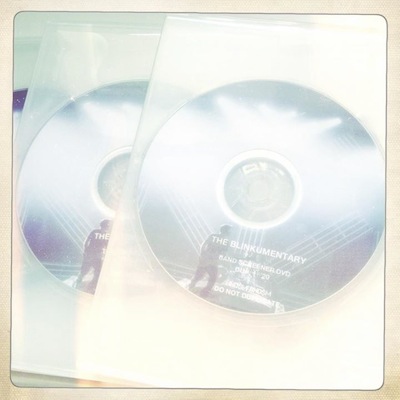 Get excited! The Blinkumentary, which includes live concert footage, behind the scenes, and more from over 2 years of filming is coming soon and it’s about time. While we don’t have a specific release date yet, we do know that the first (final) draft (photo of the preview disk above) of the Blinkumentary is done and is now being screened and reviewed.

So it shouldn’t be long now… We’ll keep you posted as we learn more.

This is my favorite cover of blink-182’s “I Miss You” — it’s performed by Boyce Avenue and Cobus Potgieter (deedlebag on YouTube).

You can grab it on iTunes here.

Okay blink fans. Here’s a common question many blink-fanatics argue about: which blink-182 album is the best? Tough to answer, right? In my opinion, the best blink-182 album is either Enema of the State (1999) or the self-titled album (2003). Let’s examine.

Enema of the State was the band’s first commercial success — it was also at that point the bands best-sounding (audio quality wise) up until that point. It really made the album so much better to listen to. Track wise, Enema is solid all the way through — fast paced, entertaining, and raw with some polish. From “Dumpweed” to “Anthem” you never feel the need to hit “next” on your iPod.

The self-titled album really propelled blink-182 to the height of their career before they broke up in 2005. It was filled with smash hits like “I Miss You” “Down” “Feeling This” and “Always” that rocketed to the top of the charts. However, I don’t think it’s as strong as Enema was track wise. For example, I could have gone without hearing The Cure-inspired “All of This.” And while I like “I’m Lost Without You” it definitely isn’t leaving you craving more like “Anthem” does.

I’ll throw this in because it’s new: what about Neighborhoods? Neighborhoods is great and includes several gems, but it isn’t their best overall album.

So what’s my pick? I’m going with Enema of the State as the best overall blink-182 album.